**Half of all sales of this book for the month of October will go towards The National Breast Cancer Foundation. If you would like to donate please visit http://www.nationalbreastcancer.org/ for more details**

-This book is suitable only to readers 18++ due to sexual situations, language, and violence.-
I’m a good girl. I don’t go out and party and I most definitely don’t sleep with half the student body. That’s what makes me and Ryder Winchester an unlikely duo. We should never work out, but yet I’m pulled to him like a moth to a flame. I want him, and I know he wants me. He has secrets that I know I could never understand, but so do I. We all have secrets, things we hide from others in fear of what they would think of us if they ever found out. I’m a bastard. An asshole. Most days I couldn't give a shit what someone has to say to me. That is until I meet Kennedy Chaps. She’s different, strong, well opinionated, and completely naive to the person I am... My body, mind, and soul pull to her like no other. I could have her, but I won’t. I won’t taint her. I won't shut out her light. We both have secrets so deep that allowing them to escape would be like losing a part of the person we are. But as friendship morphs into something much deeper I feel myself confessing my secrets; things that could very well be the end of us. Sometimes it’s about finding the right person to tell your secrets to. Sometimes it’s about the risk. Sometimes two damaged souls can’t heal all wounds, sometimes love is not enough. Hearts get broken, people lose hope, and love dies. We are Ryder Winchester and Kennedy Chaps and this is our story.

Worry eats at my insides. I’m scared. Terrified. Sam knows. He obviously knows and told Ryder. I know Ryder is playing it off as nothing, simply looking at me as a way to rid the pain. I want him just as bad as he wants me, but I am not sure I can follow through with everything that’s going on. I have to do something to find a way to stop Sam before he ruins our lives, even if it means sacrificing my own happiness.

I can feel the tears slipping from my eyes at the very idea of never seeing Ryder’s face again, of never being able to show him that life is worth more than what he has been given, of never making him believe that he isn’t anything like his father. He is amazing, kind, generous, loving, protective…I just hope that someday he will realize who he really is.
Wiping away the tears, I fix my hair and force myself to calm down.

Getting out of the car, I walk up the front steps to Ryder’s apartment complex. It has been a week since the incident with Sam and I haven’t heard from him. It is as if he fell off the radar. I try to gather my thoughts and emotions, but once at his door, I have to pull my heart out of my stomach. I am not sure what horrible incident will happen first: Will my heart beat out of control, sending me into cardiac arrest, or will I vomit all over his floor?

Raising my fist to knock on the door, I stop. A noise on the other side of the door startles me, freezing me into place. It sounds like things are being thrown throughout the house.
My heart rate picks up, and my body goes into overdrive as fear finds its way into my mind. I can’t bury it if I tried. Without hesitation, I grab the handle of the door. The coldness of the metal is the only thing I can sense.

Turning it, I open the door and my heart plummets to the floor. Danger registers in my mind, but I’m too worried about Ryder to pay it any attention. The apartment is trashed. It looks as if someone has gone through the place looking for something, but never finding it.
I hear the slamming of doors down the hall… “Ryder?” I call out. Feelings are lodged in my throat. I don’t think I can do this. Taking one look at the apartment, I can tell he is already spiraling out of control. He is losing himself.

“What?” he roars gruffly from down the hall. I can hear the pain laced in his voice. Anger vibrates off of him with every step he takes toward me. He looks nothing like the man I have fallen so helplessly for. Instead, the shell of that person stands before me. He is shirtless and sweaty. His face has a week’s worth of scruff, and his hair is all over the place.
“Are you okay?” I ask as innocently as I can. I have never been more afraid of Ryder than I am in this very moment. I can see the unstableness within him. Like a teeter-totter, he needs something, or someone, to balance him out, but he has to want it, first.

He picks up a nearby bottle of what I assume to be alcohol. He reeks of whiskey and another sweet smell.
“Do I look okay, Kennedy?” he sneers sarcastically. The words are like a slap to my face. What happened to him? I take a soft step backward, not wanting to trap myself within his grasp.

If I am being honest, I know he’s not okay. His eyes are blood shot while his face is a beautiful, ragged mess. He is so damaged, and it hurts my heart. I thought I was the only one suffering, but obviously I was wrong. How could I have been so blind to Ryder’s needs, to what he so desperately needed from me?

“Not really… You look… not…good,” I mumble through my words, not wanting to say the wrong things that may upset him even more. But then my feistiness sparks, and I start to gather my courage. “No one’s heard from you in like a week. You haven’t even called me.” I don’t want to sound needy, but I have missed him. I wanted to make sure he is okay, but I wanted to see him too. My eyes linger over the muscles of his chest, the muscles that make up that delectable V of his.

“Really?” He barks out before taking another chug from the bottle. I seriously need to find every bottle of alcohol in this place and pour it out.
“That’s weird because the only one who called me was you… and then you have my piece of shit father… but that doesn’t really matter now… does it?” I watch him, carefully listening to his slurring thoughts for any hidden meanings.
“It matters…”

“It doesn’t… and I’m not even sure why you’re still here, Kennedy.” He is fucking stupid if he doesn’t know why I am here. He is stupid to assume anything in the state he is in.
“You’re stupid if you don’t know why I’m still here,” I state, trying to hide my anger, knowing he will just get off on it. He is at the tipping point, and I don’t want to give him any more steam.
“I’m stupid…” He lets out a harsh, vile sounding laugh. “I’m the one, but you’re… you’re the innocent, precious, perfect beauty… standing in front of me… trying to pull me off the cliff.”
I look around the room. The couches are overturned, the dining room table broken, glass is all over the place, and everything else is strewn all around. I wonder how the cops haven’t been called yet.

“What happened?” I ask curiously, wanting to take the attention off of me.
“What didn’t happen?” he responds gruffly, pushing off the counter while slamming back another drink. I eye the bottle precariously; I need to get it away from him, but I don’t dare get close to him. I know the Ryder I care about wouldn’t hurt me, but this Ryder is someone darker, meaner, and more abrasive with less boundaries.

“You should probably put the bottle down.”
He eyes me, the darkness within him casting out any good. The light within him is diminishing with every drink.

“You should probably leave.” He takes a step toward me, and my breathing hesitates. Fear spikes down my spine, but I can’t look away from him. My feet are glued to the floor, and I know I won’t leave this place until I save him and bring him back to me. We both might be broken, but he is far more broken than I; if I have to, I will save the two of us, making us whole again.

I shake my head no, afraid that my voice will tremble, giving away just how much he affects me. Before I can even blink, he is directly in front of me, his hand wrapping around the back of my neck.

I am shaking like a leaf in the wind. I know he can feel it. He takes a drink from the bottle again, and the scent of whiskey invades my senses. He smells dark and dangerous, and even though I’m frightened by him, I’m intrigued as well.

“Are you afraid of me?” he asks softly. His voice is that of the Ryder I have grown to know, but the look in his eyes tells me it’s merely a façade.

“No,” I declare, somehow finding my voice. I so badly want to take him into my arms and tell him it will be okay, but I know that isn’t what he needs.

“Are you sure?” he taunts me, his fingers seizing my neck harder. There’s no pain, just discomfort.

Then it dawns on me: he thinks he can hurt me and everyone else who cares about him, like he’s his father. He is wrapped up in his very own dark world, letting the thoughts assault him.

“I know you’re in there somewhere, Ryder. Find your way out, find your way back to me,” I beg, my hands landing in fists against his chest. He’s warm, and I’m so enveloped up in the feeling that I don’t realize we are moving until my back slams into the wall. His body pins mine, a feral look in his eyes as the bottle of whiskey hits the floor.

I can’t breathe, nor can I force myself to close my eyes. I can’t do anything to protect myself from him; I’m at his mercy.

“This is me, Kennedy. The person you thought you knew never existed. My father killed him a long time ago.” His hand skims over my chest, my heartbeat skyrocketing to a point where I’m afraid I will die. 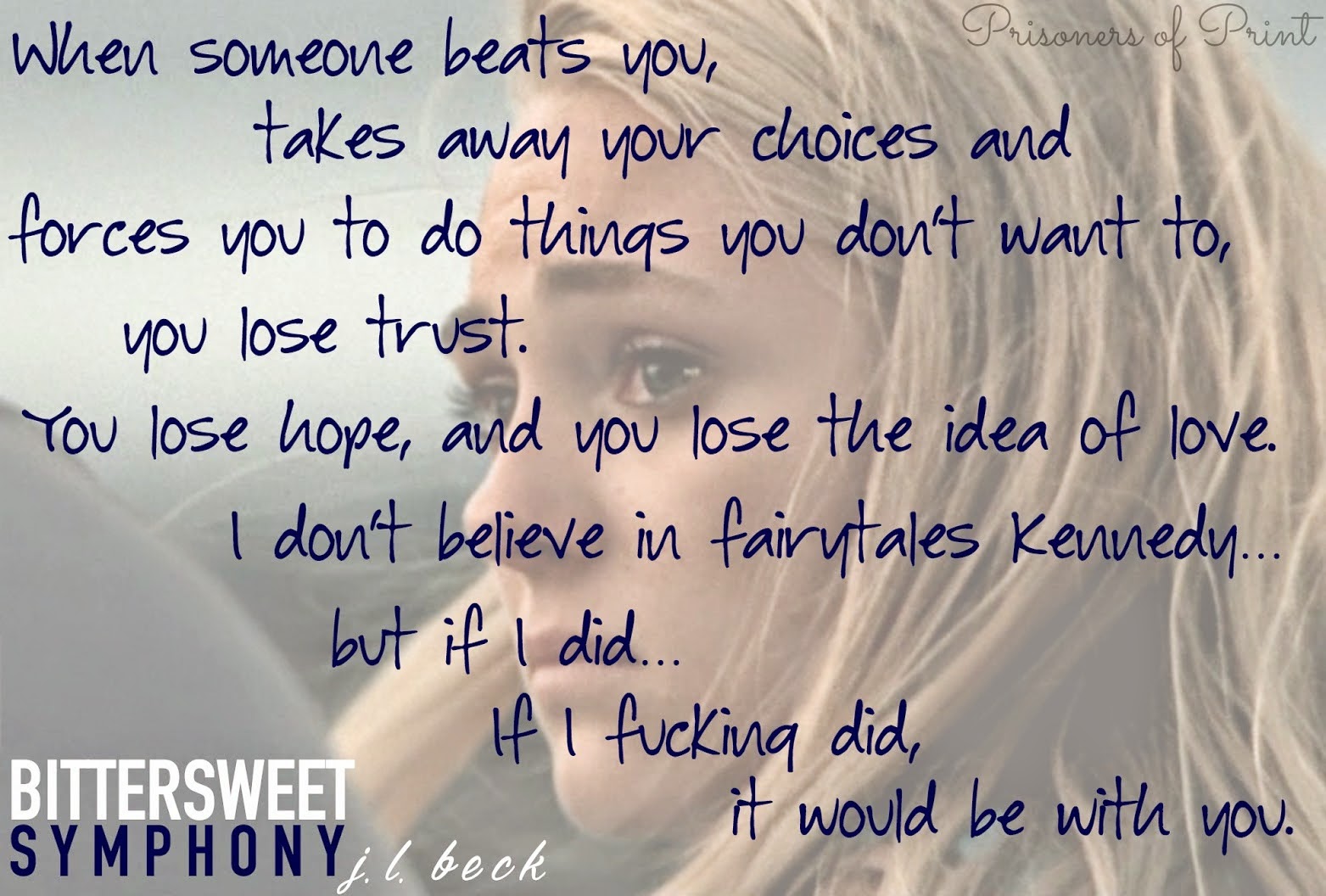 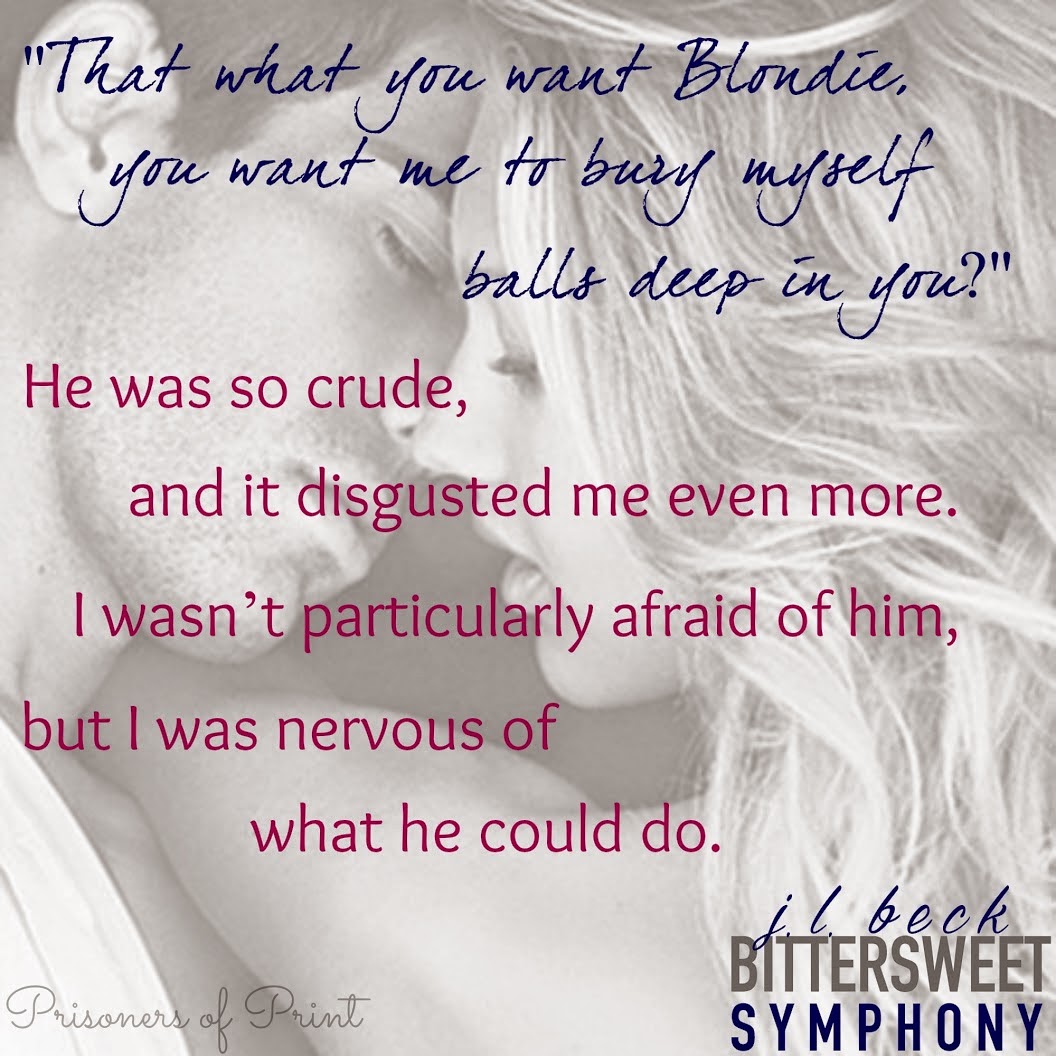 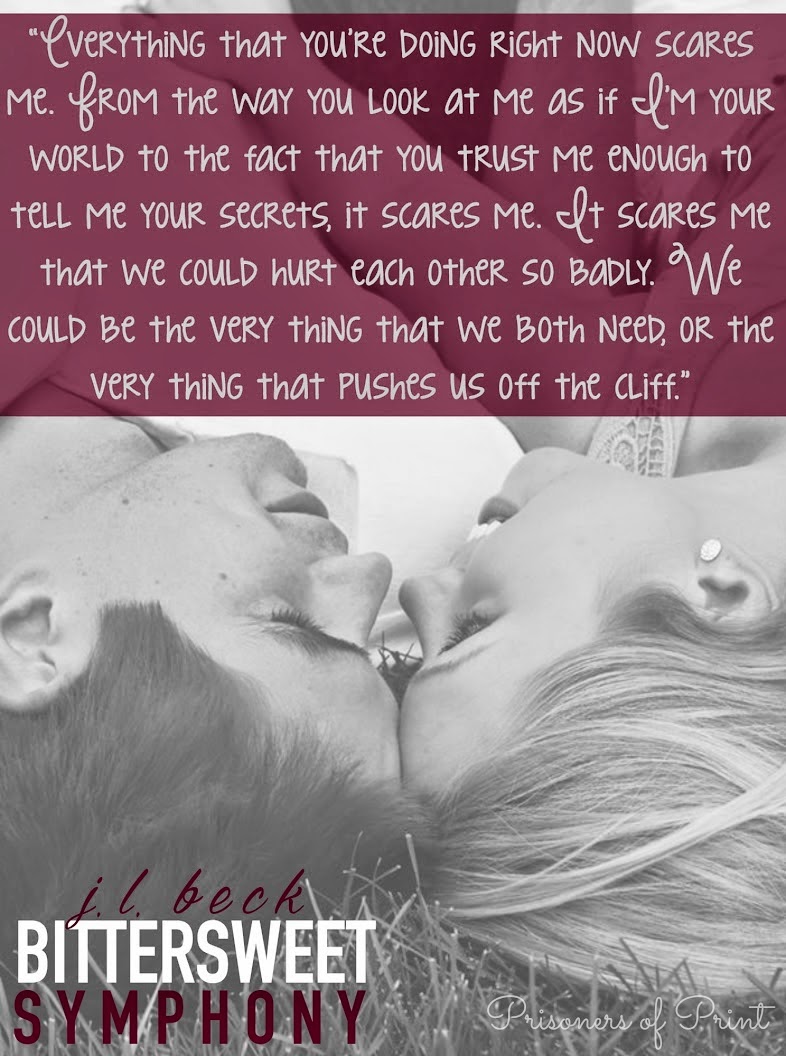 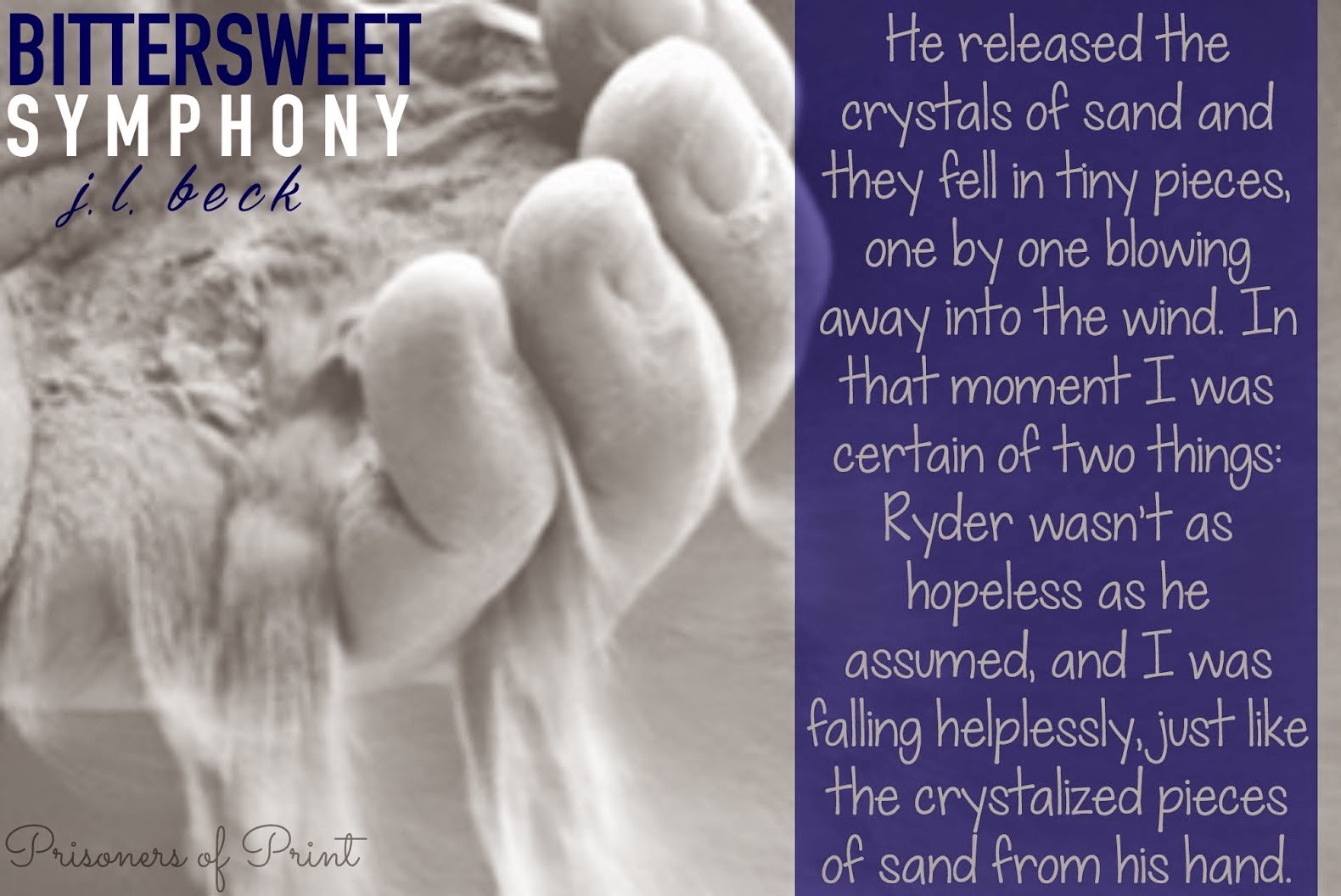 J.L. Beck is the author of Bittersweet Revenge(A Bittersweet Novella Book 1). A four part novella series. She lives in Elroy, WI with her husband Brandon, and daughter Bella. Since the moment she could reach the shelves on the book shelf shes been reading, thus influencing her to write. Her favorite books are those that leave an imprint on your soul. You know the ones that have you putting everything off because you have to find out what happens next.

When she's not writing or reading(of course)you can find her picking up after her three year old daughter, or explaining to her husband why its unsafe to do something any other way, than the way your wife told you too.

Shes a huge fan of all things drama, with shows like The Vampire Diaries, and Arrow being some of her favorites. She's addicted to all things social media, caffeine, and Starbucks.