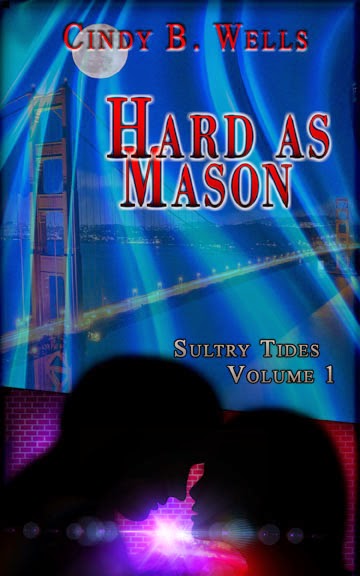 Book blurb:
Laura Bellamy is a rising star at her San Francisco company. She is smart, beautiful, professional, respected, and driven to succeed. Unfortunately, the greater her success grows, the more her husband’s insecurities are revealed. The couple has been married only three years since busy Laura took a chance on finding love on an internet dating website.

But once the honeymoon ended, the more she tried to make their marriage succeed, the more Greg’s true colors stained their crumbling relationship. He is jealous, paranoid, and cruel. Adding to their pressure-cooker marriage, he focuses his insecurities into pressuring his wife to start a family and give up the career that makes her happy.

Laura has worked with the same company for longer than she’s known her husband. In that time, not only has she loved her career, she’s also enjoyed her friendship with Mason Paladino: a fellow executive who is witty, sophisticated, and a bit of a goofball who sports a gorgeous swimmer’s body. For too long, the friends have suspected they share romantic chemistry, but neither will break their vows. If the right conditions present themselves, will they act on their simmering desires? Would it be wrong to deny their love? Can Laura trust her heart to show her the right path after failing miserably with her husband?

When Greg’s insecurities push him over the edge from cruel to criminal, will Laura stay, or end the toxic relationship? And if he catches her with a new man, how far will his anger drive his actions to tear them apart?
Find out what happens to Laura and Mason in Hard as Mason, book one of the Sultry Tides series by Cindy B. Wells. 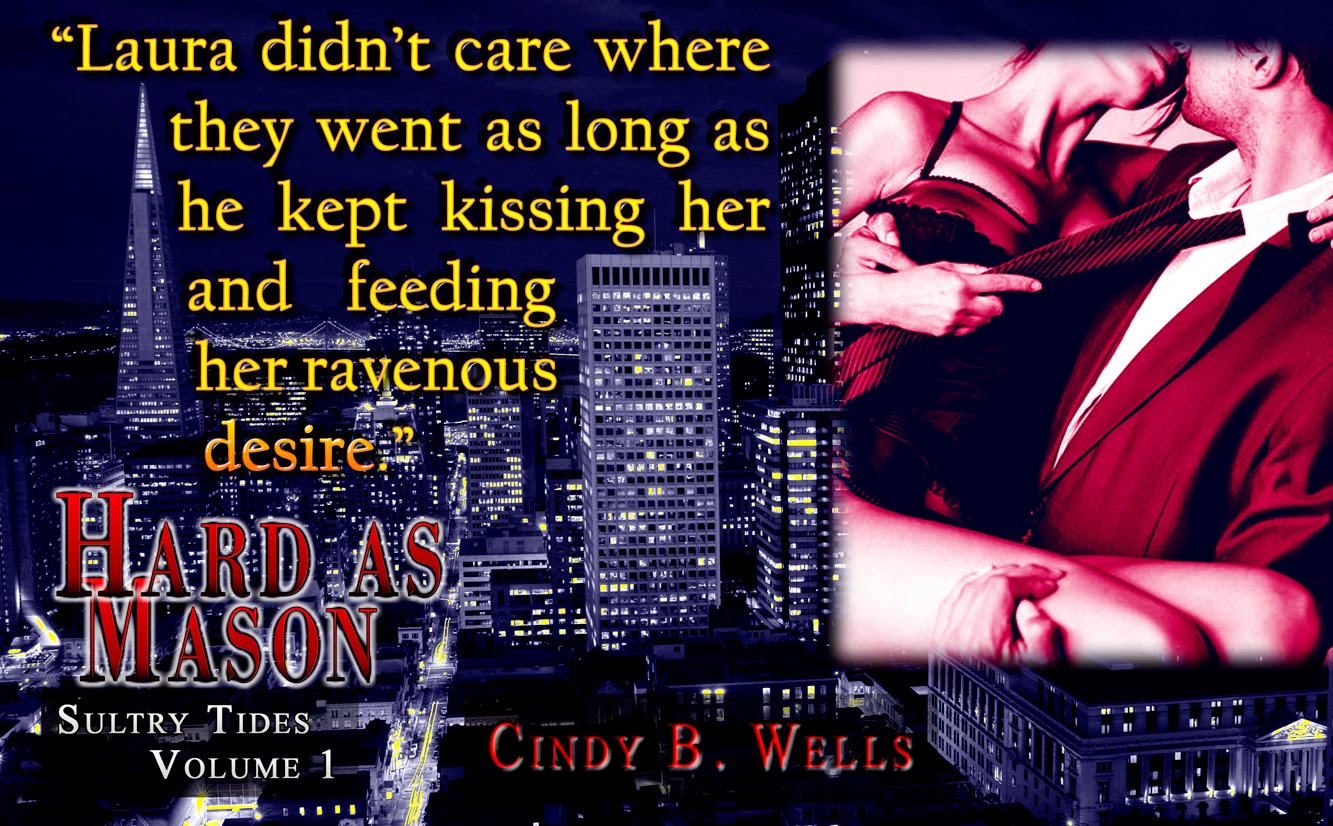 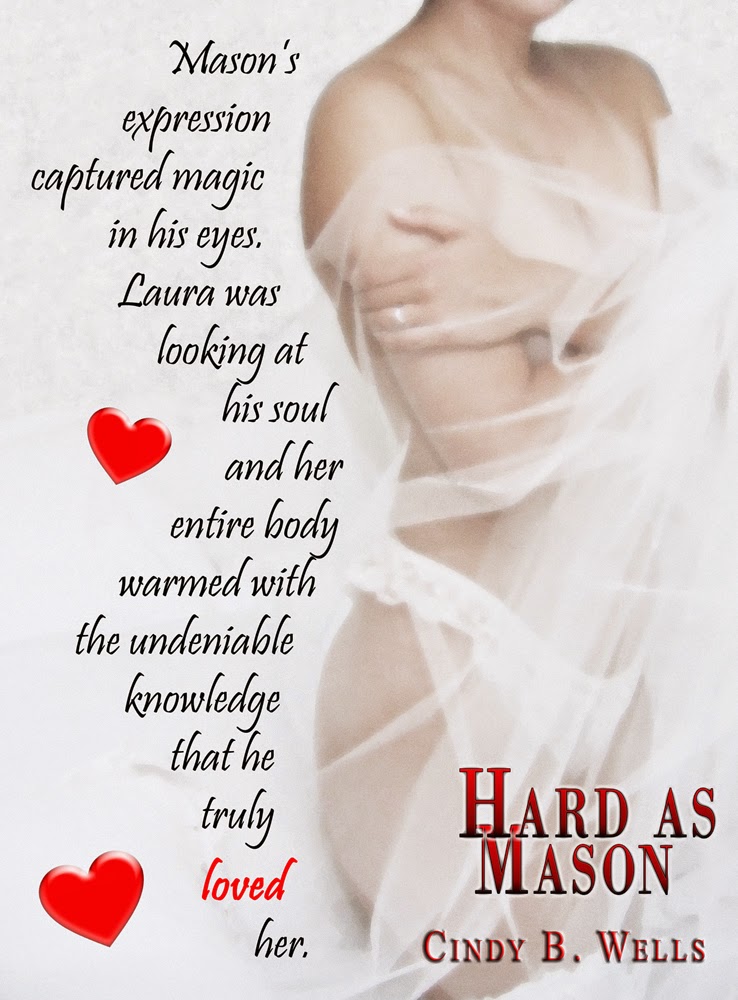 Book Excerpt:
“Mason, I can’t remember when I’ve had such a wonderful time...with anyone. This weekend has been…I mean, I just can’t express how—”

“I know. I feel the same way,” he returned. They kissed and turned to gaze out the windows as the sun began to slip down below the horizon. The waitress returned with their drinks and they gently clinked their glasses together in a toast.

“Here’s to our beginning,” Mason offered. They sipped their drinks.
The blue sky shifted with broad strokes of yellow, orange, pink, and steel gray as the evening chased away the day’s light. Deep blue tones gained control of the heavens like the sky was relieved to be rid of the boastful sun.

“So beautiful,” Laura’s gaze was fixed on the shifting light.

Mason’s attention was drawn to the mellow jazz music from a small band that had begun playing near the opposite wall. “Shall we?”

Laura smiled and nodded. He took her hand in his and they crossed the room to the compact dance floor. She draped her arms around his waist and wove her fingers together. Mason, too, wrapped his arms over hers to encircle her back. He lowered his head so their cheeks pressed together. They closed their eyes and rocked gently, back and forth. Their senses absorbed the smooth, slow rhythm of the saxophone’s groans carried over the other instruments’ accompaniment.

A woman began singing in a breathy voice that was sultry and dulcet. One song melted into another as Mason pulled their faces apart. He raised his hand and caressed her cheek. Gradually, Laura sleepily opened her eyes and gazed at him as if she were under his spell. And again, she closed her eyes as his mouth neared hers. She could feel his slow, hot breaths while his head subtly circled so their lips barely touched. But every time she felt his silky lips grazing her own, the nerves within her plump lips tingled with electricity that sent butterflies filling her chest and belly, and magnificent chills crawling down her back.

Mason’s hands found their way to the back of her head. Applying deliciously slow control, he lightly pressed his mouth over hers causing her groin to heat up and ache for his touch. She could hear her speeding heartbeat in her ears and felt her juices begin to flow. Their kiss was delicate and overwhelming as the tips of their tongues danced teasingly. Their lips pulled away. Laura’s eyes eased open as she looked up at Mason. They both carried expressions that were serious and pensive. A deluge of emotions washed between them.
Oh, this man. My life has been leading me into his arms.

Mason could see her feelings written on her face. His fingers trailed lightly from her forehead, down her cheek. His thumb caressed her lips.
Their chests rose and fell from prolonged, full breaths. Their bodies were influenced by the smooth jazz, but they ignored everything else around them. They were caught in a dazzling trance as if they were floating through the darkened space. 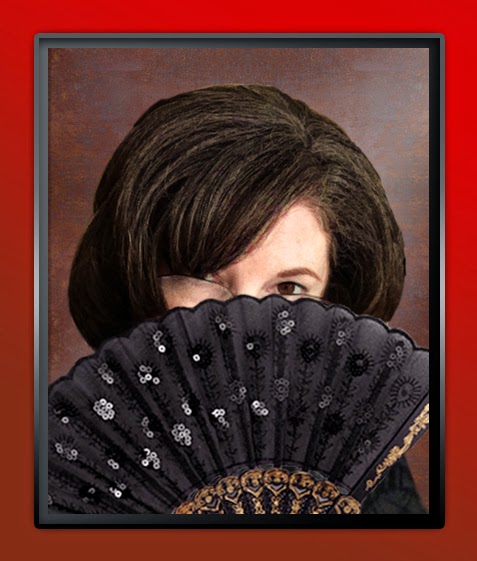 Cindy B. Wells considers herself to be a romantic at heart. She enjoys creating steamy stories that are intelligent, fun and sexy with strong characters and new discoveries. Oh, and food…because what goes better with romance and love than spectacular cuisine? Therefore, you can expect to find some of her favorite restaurants and particular dishes in her stories.

A San Francisco native, Cindy has worked as a professional writer in the Bay Area for many years. She splits her time between the San Francisco Bay Area and the place she likes to call home: the coastal community of Carmel, California. When she’s not writing or reading, Cindy enjoys traveling, camping, sailing, painting, swimming, wine tasting, baking and, of course, spending time with her family.

Is there a genre you could never write? Which and why?

Tax law nonfiction. I realize that sounds incredibly specific, but I have good reason. After I graduated college, I went to Washington, D.C., where I got a job working on Capitol Hill for a congressman from California. I was given responsibility for several issues, but the one I had to turn down was tax law. I can’t stand the subject; I find it boring as hell. Looking back, it’s unfortunate I was too young at the time to appreciate the power held by that topic.

Can you describe your book in one sentence?

After years of simmering chemistry between two executives, a San Francisco office romance blooms as new desires are discovered when the moment is right, but Laura's obsessive, abusive (soon-to-be ex-) husband isn't going to let his wife walk away easily or unscathed.

What was the hardest chapter (or part) to write and why?

When I write any story with specific characters in mind, I suppose it’s a little bit like acting out a scene. These characters become a part of me—they become like very close friends—while I’m writing about their lives and experiences. So when a character is in pain, I, too, feel that pain; I feel their emotions and fear for their safety.

(SPOILER ALERT) In Hard as Mason, there is a section in which the lives of the lovers are threatened by Laura’s husband. Greg’s actions are violent and cruel, and writing these scenes was exhausting and emotional. The more invested I am in the happenings of the characters’ world, the more the reader (I am hopeful) will be invested in their story. By the time the police show up, you won’t be sure if the lovers will live or die. As you read those pages, know that I was spent after finishing the scenes.

What makes your book so different from all the books out there?

I like to think that my background in journalism and covering crime brings an added dimension to my writing; especially in the Sultry Tides series. There’s an authenticity to the criminal aspects of the stories (yes, there will be more crime and suspense in the books that follow Hard as Mason). Many times—more than any fiction—true life situations can be more outrageous, dangerous, provocative, and intriguing. After reporting on thousands of crimes and witnessing some of the terrible actions people are capable of committing, now I call on a mixture of crime scenes to use in my stories. I suppose this is a bit of a cathartic act on my part after seeing…well, some terrible things.

What are you currently working on?

Presently, I am focused on the second book in the Sultry Tides series, as well as an anthology of short stories, and another romance novel.