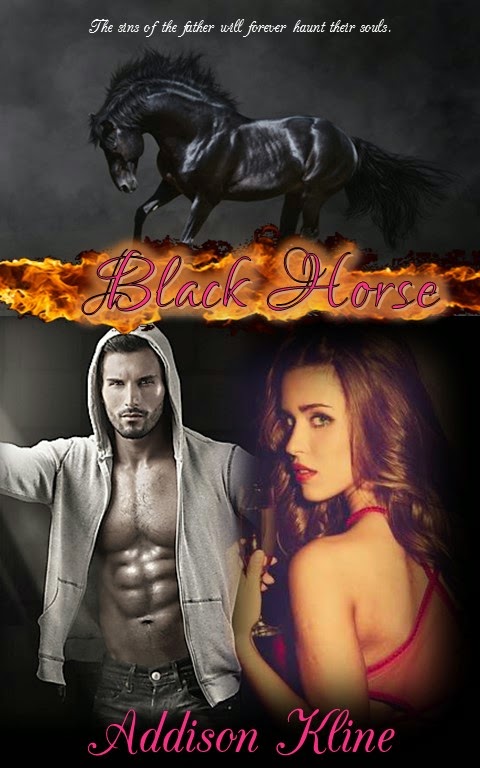 There is no sensation, no experience more delicious and tempting to the senses than the taste of forbidden love. The longing… The desire… The unquenched thirst for his touch. He was the man I was never supposed to love. I was supposed to hate him. I suppose part of me did and that is what made the desire so much more intense. He set a fire under my skin that burned white hot with every smoldering glance. He sets my soul ablaze, the slow burn of passion aching in every inch of my body.


Black Horse. The name haunted my dreams… But regardless of family vendettas, old hurts and contemptuous blood shed, the heart wants what it wants… and mine has a mind of its own and my mind is set on Colton McClain.


His family is known by his father’s nickname: Black Horse. Like one of the four horses flying out of the gates of hell, Tom “Black Horse” McClain ripped my world apart fifteen years ago. I was only seven when I found my mother and father dead in their beds, with Tom McClain standing over them with a blood stained butcher knife. He would have come for me, too, had my brothers not saved me. Seth, my older brother, swooped me up before I had the chance to scream and covered my mouth with his hand.

Tom McClain sought out the services of my father in a time of great need. My father, Nathan Ford, was a highly reputable criminal defense attorney, who took on Tom’s case when he was accused of murdering his wife after she was caught in bed with another man. Tom didn’t have the money to pay for my father’s services, so he took on the case pro bono because he believed in Tom’s innocence. I remember my dad meeting with Tom in his study while my mother looked after Colton, my brothers and I in the kitchen. We had become very close. My brothers once considered Colton their best friend. Not anymore.

My father got Tom off on a technicality. The prosecution had no reliable witnesses and they weren’t about to rely on the testimony of a five year old boy; Colton himself. He had witnessed the whole ordeal himself. How does Tom repay my father for his kindess and generosity? He murdered him in his sleep. He killed Daddy first. Momma screamed when she saw a man standing over her bed, and that is what woke me. In just my nightgown and socks, I tip-toed down the hall past Timmy, Randy and Seth’s bedrooms and as I entered the doorway to Momma and Daddy’s room, Tom McClain plunged a knife through my mother’s chest. My blood ran cold. I tried to scream but no sound would come out. The next thing I knew, Seth had his hand over my mouth and we hid in the hall closet. Tears streamed down my face as my arms and legs shook. I could her Tom’s boot echo against the hard wood floor of the hall.

“Sssh… Don’t say a word…” I remember Seth urging.
The air in the closet was stifling; warm and dead like a coffin. I could hear my brothers’ heavy breathing. Our dog Micah’s frantic barking from the back yard. She knew something was horribly wrong. His bootfalls were getting closer… louder… I took a deep breath and didn’t dare exhale in fear that he would hear me. Somehow, I was able to stifle my tears, but something happened that was out of my control. My throat caught from my sobbing. Tom heard it. The foot steps intensified, beating a path to the closet door. Seth, still firmly holding me, swung around so I was facing the inside of the closet. I focused on the faded floral pattern of the shelf lining that was barely visible in the dark lighting of the closet. I focused on anything but the sound of Tom McClain’s approaching footsteps. Then a loud clicking sound made it impossible. The sound of a shot gun barrel banging into place. He didn’t even bother opening the door.

Out of instinct I jumped into the shelf before me and cowered behind the extra blankets mother kept neatly stored on the shelf. I was stunned that I was still alive, until reality set in. Seth had slumped down against the door of the closet, unrecognizable and motionless. The shotgun blast had obliterated his once handsome face.
I am supposed to hate Colton McClain, but I can’t. When the police showed up the next day, they found Colton locked in his father’s pick-up a block away, hungry, thirsty and distraught. He was taken away by the state and put in foster care because none of his relatives wanted to have anything to do with the Black Horse name. Black Horse was caught trying to jump the border with my father’s wallet in his pocket and $10,000 in cash in a duffel bag. He traveled alone, having abandoned Colton in his truck back in Oakely. I guess his boy knew too much. When officials apprehended him, they ran my Daddy’s license and discovered that he was found murdered. Tom pleaded insanity, but after a thorough psychiatric evaluation, it was concluded that Tom McClain knew exactly what he was doing. He was sentenced to prison for twenty years, having received a lenient judge; a rarity in the State of Texas.

My surviving brothers Randy and Tim could never know about Colton and I. They’ve had it out for him for years. Bloodlines run thick around here. The sins of the fathers will forever haunt the sons, and women are to stand back and stay out of the way. Well, I have something to say about that… Fuck that, Colton McClain didn’t murder my family. His father did… and he suffered just as much as we did. Now fifteen years after the crime that screwed both of our lives up royally, Black Horse is getting out of jail. Just four days until his release. Colton wants to hide me. He said we can run… Start over somewhere else. My brothers are armed to the teeth and a war is about to break out. I have no intentions of sitting down or running away like a little girl. We cannot hide from this anymore.

Our past does not own us, and we owe it to our hearts to show the world that love can arise from the darkest of places.


a Rafflecopter giveaway
Posted by Olivia at Thursday, June 05, 2014