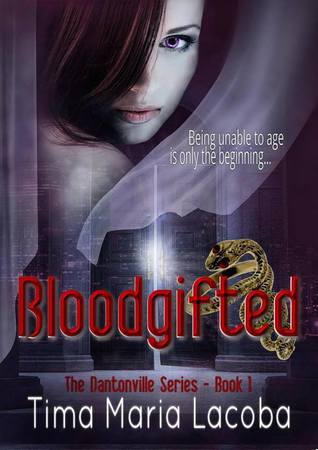 Being unable to age is only the beginning …
Laura Dantonville is shocked to learn her strange genetic mutation, is linked to a dark family secret—a centuries-old curse that turned her Roman ancestor into a vampire. Now that she has come of age, she is the key to breaking that curse. But she’s also the prey of rogue vampires who inhabit the city’s frightening and violent underworld, as her blood gives them the ability to daywalk. For her protection she’s assigned a guardian—the handsome, sexy and dangerous Alec Munro.
Former military doctor and current leader of the Brethren, Alec Munro has no intention of being responsible for Laura. After all, it was her damned family who was responsible for his untimely death and subsequent transformation. He owes them nothing, yet he also knows his own fated role in breaking the curse, and the unthinkable consequences should he not accept.
To the Brethren, the ending of the curse spells disaster. Among a powerful few malice grows…

I'm a fifty-something-young woman who lives on the Central Coast, an hour's drive north of Sydney in Australia. My little house is surrounded by bushland, possums and seed-dropping Rosellas on one side, and waterways on the other. I moved out of the big city a few years ago, and the only thing I miss about it are the quaint shops and cafes. But I've gained fresh air and a home with front and backyards--with a garden swing--and wooded hillside views.
Before becoming a writer, I was a practicing archaeologist, and was fortunate enough to have worked on some amazing digs around the world. After several years in the field I was drawn to teaching and ended up as Head of History in a local high school. While there I took the opportunity to take my students overseas to visit various archaeological sites in Europe and Britain. It was a fabulous way to combine my love of history with travel, and share it with others. On one tour, in Italy, I managed to indulge my other passion - gelato ice cream. We renamed it The Gelato Crawl of Italy!
I've always been a storyteller, but it wasn't until five years ago that I seriously ventured into writing. The result was Bloodgifted. In 2011 it was shortlisted in the Atlas Award and came fourth. In 2012 it was listed among the top ten in the Choclit Search for an Aussie Star Competition. In 2013, I was offered a publishing contract but declined in favour of going indie. I liked the idea of being in charge of my own creation.
Bloodgifted is just the start of a four-part series I've entitled, The Dantonville Legacy. Book 2, Bloodpledge, was released four months ago, and Book 3, Blood Vault, is due for release June 2015. Later I intend writing individual books on the other characters in the series, for they all have their own story.