Cover Reveal for Happily Ever After by S.K. Hartley 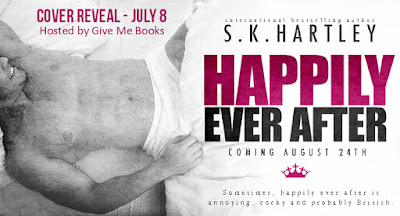 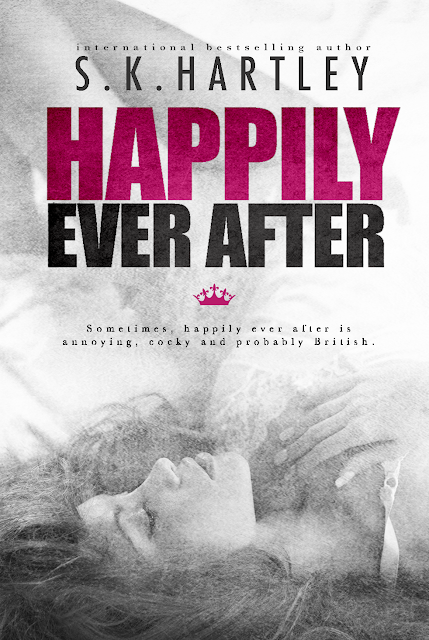 Note to self: Never beg the man you’ve been avoiding for three months to help you. You should also never say you’ll do anything just to get out of a questionable date...

Three things I dislike about Luca Black:
1. He lies.
2. He’s cocky and self-absorbed.
3. He knows how to play me like his Aston Martin.

Now I’m stuck at his apartment. All because I needed his help. Now I have to face the fact that, no matter how much I try not to stare, he looks delicious in nothing but a towel around his waist.

What the hell was I thinking?

Seven days.
It’s just seven days with a man who can turn me on with a single look, and make me consider murder every time he opens his stupid British mouth.
I could do this... 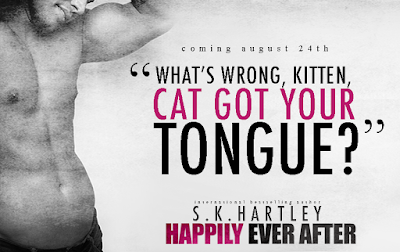 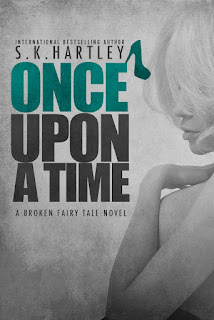 
Throwing caution to the wind, and no doubt my dignity, I hit call and prayed. I prayed he didn’t answer and that I’d have to some how climb out of the tiny, broken window above my cubicle and never step foot on this side of New York ever again.

The Gods were now laughing hysterically.

And there went my sanity… followed swiftly by my panties.

“Luca.” His name fell from my lips like a caress instead of what it should’ve been, a snarl. Coughing gently, I tried again. “Luca,” I said, a little more forcefully, but now I sounded like I couldn’t put a single sentence together.

It was going great.

My hand went to my forehead as I watched my dignity jump out of the window along side my sanity and panties. Could I have sounded any more desperate? I should just end the call, I could say I accidentally butt dialed him while I was out with a super hot doctor on a super hot date. Then I’d somehow have to explain why I said his name, but I could work around that, right?

God dammit, Kylie, get your shit together. Just ask him to come and get you, it won’t kill you. The doctor might though.

I rolled my eyes and decided to suck it up but just as I was about to explain my predicament, he opened that stupid mouth of his.

“You, Kylie Jackson, need my help?” His deep laughter filled my ears and mortification took hold of me. This was a stupid idea.

“What the hell is that supposed to mean?” I spat.

“It means that the last time we saw each other was over three months ago, Kylie. I’m surprised you even remember my name. You’ve been avoiding me like the bloody plague and now you want my help?”

“I haven’t been avoiding you.” I mustered. It was a lie, but it was the best I had in the situation I was in. “Look, I know we haven’t spoken in a while but please, I’m begging you, help me out here?”

That sentence alone would be my undoing.

“You’re begging?” I could feel his excitement through the phone, coming off him in waves. What had I done? “Kitten, if you’re begging, I’ll do just about anything… but there’s a condition.”

I rolled my eyes, “When isn’t there a condition with you?”

“A little bird told me that your apartment is being redecorated this week and you need a place to stay until it’s finished.”

My eyes widened and I silently gasped, wondering how the hell he knew that. Whoever the little bird was, little bird was going to see the pointy side of my stiletto.

“I don’t want to know how you know that, but yes, I’m staying over at Quinn’s apartment for the week while they finish off.” Standing to my feet, I was about to press my head against the locked door of my cubicle when I thought twice. “Ew.” I whispered.

“I’m afraid not, love.” He chuckled into my ear — a deep resonating chuckle that did something stupid to my brain.

“What are you talking about? My bags are already at Quinn’s place.”

“Kitten, you’re not staying at Quinn’s. You’re staying with me. That’s the condition. Take it or leave it.”

If I wasn’t mortified before, I certainly was now. Had he lost his damn mind? There was a reason why we hadn’t seen or spoken to each other since my best friend's wedding, not to mention the anger I had towards him. The anger quickly resurfaced as I thought back, remembering how much of an asshole liar he was, and gave him my answer.

“No. Absolutely fucking not. Not on God's green earth and if you were the last person on it.” I blurted it out faster than I could think it. Shit.

“Looks like you’ve still got a problem and I have a very good glass of Scotch in my hand. Good luck, Kitten.” I could feel his smirk taunting me and it boiled my blood. I took a look at the open window above the toilet and grimaced, my anger simmering as I realised that if a week with Luca was the only way out of this stupid date, I’d have to suck it up.

“Fine!” I shrieked, “But there’s going to be ground rules. I may not be the sharpest tool in the shed, but when it comes to you, I know how to play your game. Now can we please move on to how the hell you’re going to get me out of this date with the serial… doctor?”

“You know rules are made to be broken, right?” His voice deepened, taking on a darker tone. It was the same voice that had me unraveling at the seams not so long ago, the same voice that could get me to do just about anything. Shit, I needed to get out of this. I couldn’t do this.

“On second thought, I think I can handle the Doctor.” I quickly fired back. My palm moved to my forehead as I tried to think of an escape plan, another route, something that would just get me the hell out of here and over to my best friends apartment, where I could change into my pajamas, and stuff my face with Ben and Jerry’s chocolate fudge brownie ice-cream and a bottle of red.

My train of irrational thought was suddenly cut short with a banging on the bathroom door.

“Are you okay? Do you need some… medical assistance?”

I shuddered as I recognised the voice of my date, clearly stood on the other side of my only rational exit out of here. I groaned. Why did I always get stuck with the creepers.

“Well, if you think you have this handled, I’m going to go back to my Sco-” “OKAY! Please, just get me the hell out of this place before I’m bludgeoned to death down an alley on the upper east side.” S.K. Hartley is a wife and mother to an oil soaked husband and tomato sauce covered son by day, by night an international bestselling author.

Located in the not so sunny North West of England, UK, S.K. Hartley deals with daily battles against her love of chocolate and her coffee addiction, along with defying autocorrect and British to American translations.

a Rafflecopter giveaway
Posted by Olivia at Thursday, July 16, 2015