Pre-Order Sale: What a Girl Wants by Blair Babylon

Pre-Order your copy of this best-selling (already!) Rock Star Romance NOW!
(Or trust your memory to buy it on Tuesday, Sept. 23.) 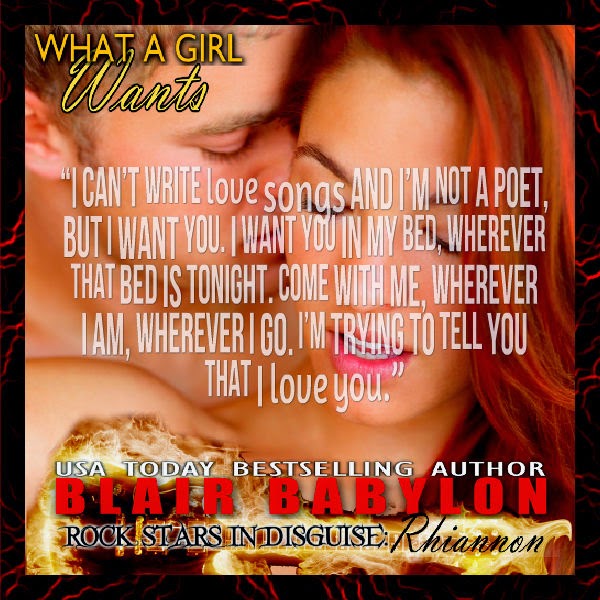 EXCERPT: Rhiannon drew herself up to her full five feet plus two whole inches, lifted her pudgy chin and nose in the air, and walked into the conference room. Inside, a black-suited security team stood behind five men sitting at a conference table. The seated guys looked like a staff meeting on Olympus: like the platinum-blond Sun God Apollo shone brilliant in his beauty beside radiant Eros, God of Love, who slept beside the seductive devil, black-haired Thanatos, who was the deification of Death, and two more blazingly beautiful demi-gods. Rhiannon stopped hard, nearly catching her high heels on the carpeting. Oh my God. Those guys had been on the cover of last month’s Rolling Stone—all shirtless in the cover photo because they were beyond ripped, they were frickin’ shredded— because they had released two indie, MP3-only albums that had gone platinum. The article’s headline was War Breaks Out over Killer Valentine because three major-label recording companies had launched a vicious bidding war for their next work. Holy cow. Well, she wouldn’t have to worry about anyone looking at her on the stage.