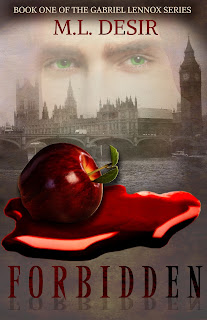 Who wants to live forever and at what cost? Forbidden, Book One of the Gabriel Lennox series, is a dark fantasy that asks this very question.
Three-hundred-year-old Gabriel Lennox doesn't look a day over 18 and despises being called a vampire. He prefers living separately from the decadent pathetic blood drinkers known as the Chosen. Gabriel prefers to live as an immortal who abstains from the liquid red heat simply because he chooses to do so.
He resists the desire for blood until three other immortals intrude upon his life of solitude and elitism. Beautiful and powerful Lilith, his alleged creator, wields the ability to torment him through visions of the past he would rather forget. Seth, a sadistic monster in the guise of a handsome youth, has the power to bless or curse others with dreams or nightmares. Nikolai, a mysterious child robbed of his innocence and mortality is the third of the interlopers who wreak havoc on Gabriel's solitude.
Through these three, a dramatic series of events unfolds that will force Gabriel to choose between his desire for isolation from humankind and his fellow Chosen or his thirst for justice in a world where injustice is rapidly gaining.

Monique L. Desir was born and raised in Florida. She is currently a 6th and 7th grade Read 180 teacher. Desir’s books and stories come from discussions she has with her extremely loquacious West Indian family members, current events, myths, fairy tales, and sometimes dreams. At a young age, she was influenced by role playing games like the Final Fantasy series, Legend of Zelda, and Ogre Battle. Though most of her books are aimed toward adult readers, she has started to create stories for young adults and children. She is a member of PINAWOR (Pinellas Authors Writers Organization), a writing organization that focuses on manuscript critique and improvement. She doesn’t hesitate to seek advice from seasoned writers to help with her writing. When she’s feeling exceptionally bold, she participates in NANOWRIMO (National Novel Writing Month), where writers young and old work on completing a novel within 30 days!